Baron of the Barossa represents Brockenchack

She has been variously described as an “Australian National Treasure”, the “world’s best storyteller”, or as the “official Baron of the Barossa”. Sharing knowledge about Brockenchack at the Winemakers Masterclass will be Jane Ferrari, whom many of you will remember from her legendary storytelling at the event held in 2019.

Bockenchack is named after Trevor and Marilyn Harch’s grandchildren; Bronte, Mackenzie, Charli and Jack. Their vineyard is surrounded by the beauty of the Barossa’s picturesque Eden Valley where they offer a unique cellar door experience including a luxury two-bedroom bed & breakfast homestead nestled amongst the vines.

Jane Ferrari has worked as the brand ambassador for Yalumba for 25 years and is currently running her own consultancy business. In 2012, Wine Communicators of Australia named her its “Wine Communicator of the Year”. She’s a winemaker in her own right – having graduated from Roseworthy College alongside industry icons, Rolf Binder and Chris Ringland back in 1989.

Favourite Food? Without a doubt, my favourite food is Southern American BBQ and I’ve been lucky enough to trek across Kansas, Texas, Tennessee and Mississippi, chasing the best ribs and brisket ever! I think the best $3 I ever spent in the USA was in a Texas bbq joint – on a ‘Texas Twinkie’ – a small banana sized jalapeño, stuffed with chopped brisket and cream cheese, wrapped in bacon, sealed with maple syrup, and slow smoked with the meats in the BBQ!

Favourite place to travel? The Isle of Islay, off the west coast of Scotland. I’ve braved the three-hour ferry ride and visited on three separate occasions, splitting my time between the nine single malt distilleries during the day, and the Gaelic music and fresh catch seafood in the pubs of an evening. I think it’s a combination that’s pretty hard to beat, and would say that I’m such a fan that I’ve voted myself the unofficial ambassador to Australia for Islay, and in particular – the Bunnahabhain distillery and its lightly peated single malt whisky.

The three people you’d most like to invite to dinner? Definitely Elvis – I’m a massive fan of the King of Rock’n’Roll and am more than happy to confess to three visits to Graceland. Dolly Parton – also a big fan, but she’s also one of the sharpest business gals around, and an absolute hoot – I’m a veteran of two visits to Dollywood, the Smoky Mountain theme park that she successfully resurrected, that employs the majority of local folks in the area. And William Marshall – the greatest English knight of all time – knighted 1166 –  his story being still largely unknown to most folks. Ask me to tell the story about William and Richard the Lionheart!

What do you enjoy doing when it isn’t wine? I’ve fallen in love with bees. I currently have two hives, and hoping to have four by the end of the year. These little critters are truly astonishing, and the more I find out about them – the more I want to know, and contribute to the non-commercial movement that exists to keep bee colonies ticking.

Or you’ll find me at the football – any code.

Most valuable piece of advice you’ve ever received? When I was working for Rockford Wines, Robert O’Callaghan told me – you’ll never do anything harder, than make something look easy. It was essentially advice to work really hard and build up your knowledge base to such an extent that you could just run out stories at ease… and answer anything. Always be well prepared. That has served me really well for the majority of my career.

If you had to describe yourself as a wine……what would it be and why? I reckon I’d be an old Rutherglen Muscat……a bit disjointed as a youngster, settling down after a good few years to blossom as an older wine – well balanced sweetness, generous and luscious! 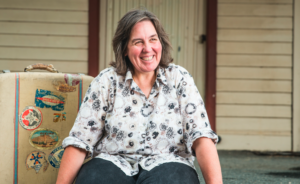